A wholesome exchange at /r/archlinux that got me thinking

Was browsing reddit today and saw some of the most heartwarming and wholesome online moments ever. This thread is today’s most upvoted thread in /r/archlinux (for non-techies: Arch is a very advanced flavour of a computer operating system called GNU Linux).

In this thread, a newbie to Linux was asking how to stop his ping command in a terminal (the large evil-looking black prompt that you see in movies), which to many seasoned Linux/macOS users is a very simple thing to do — just press Ctrl-C.

In this forum full of egoistic advanced users, you’d expect ppl to give snark comments or laugh at him, but instead the top comment (see picture above), was just “Ctrl-C”, followed up with “Np, we are learning everyday”. No bullshit, no judging, just him trying to help. The rest of the thread was filled with other advice trying to help him learn how to navigate the terminal. 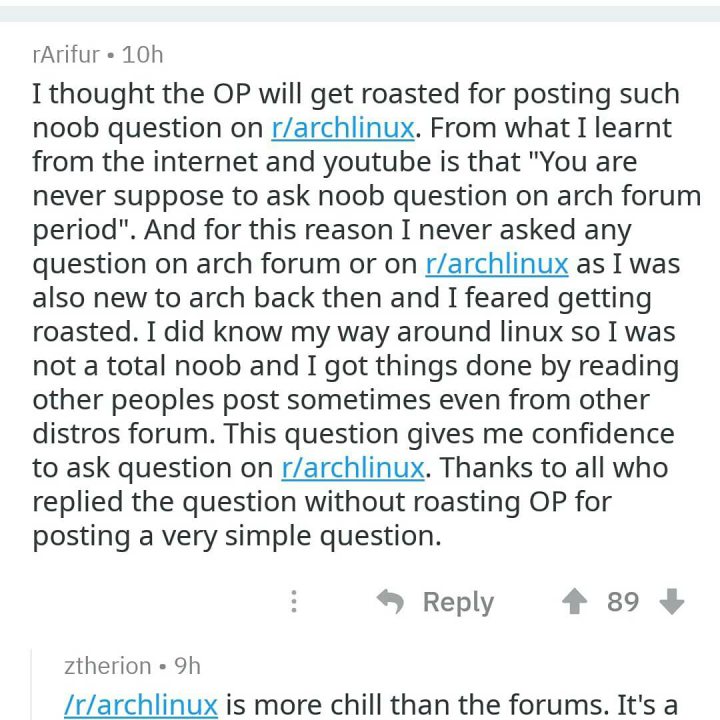 It’s rare to see people be so nice to others. And I feel it’s because when everybody came across that innocuous thread asking for help, it reminded them of themselves when they were once starting out. At least for me it did. 10 years ago when I first booted up Linux in a virtual machine, I looked at the terminal and I was so lost. I wondered why anyone would even use that horrible thing when we have perfectly intuitive graphical interfaces.

Fast-forward to today, my whole workflow is centred around the terminal and I use it so much (still really bad at it BTW) that perhaps I forgot how difficult it was for me back then, when I first started out. And perhaps everybody recognised that as well, and were really all just eager to help with that guy’s learning process.

But the key takeaway for me was: they didn’t judge him for asking a “stupid question”. Many times in life we are all put in these situations where we are needed to overcome insane learning curves. We are expected to produce something but we are always looking for the “right way to do things”, the “model answer”, and we are always scared of asking for help, scared of asking for advice, because we are afraid others will judge us for not using the “best way”.

Then you realise, people don’t actually care about the minor details of what you are doing right or wrong. They don’t judge you. They are just concerned about whether you are trying, whether you are learning. People don’t expect you to be Isaac Newton when you just learnt about the acceleration of freefall.

But the sad thing is, we are often so hampered by our “quintessentially-Asian mental model” that we are so afraid to ask questions and try out new stuff that we inadvertently set mental boundaries for ourselves.

So don’t let the fear of other people create artificial barriers for you. Why not just let your hair down, learn as much as you can, to do what you want to do? You don’t need to be a genius to create something good. Focus on creating something good, and when you succeed, people will call you a genius.

I write code, I drink coffee, I have fun. Sometimes all of them at once.Christopher Goh on Twitter